I was suppose to let Kintaro and TT sampl and review the new Orijen Freeze Dried Cat Treats from Chewy.com. Right after we received the package, I let them try a few treats each. They LOVED them. Scarfed them right up. I thought to myself, this will be a great photo op and review. However, fate had a different idea of how this review should turn out.

This review was suppose to be up in December. I did remember the treats on couple of occasions but were unable to locate my "safe" hiding place. I thought it was strange that I could not find the treats. Since my little furry thieves hid the evidence, I repeatedly forget all about the treats and the review.

Our official review of Orijen Freeze Dried Cat Treats.
Kintaro and TT give a sneaky, scarf those yummy treats "5 toes" up (if they had opposable thumbs, it would be 4 toes and 1 thumbs up) to the new Orijen Freeze Dried Treats for Cats.
mewings by kintaro & tt , and momsbusy at 2/01/2014 12:00:00 AM 14 comments:

We are reviewing Natural Balance Platefuls for Chewy.com.  These are grain free (no corn, soy, or wheat) and have no artificial flavors or colors. We received no monetary compensation for our review.

Kintaro and TT tried the Chicken & Giblets in Gravy and the Turkey, Chicken & Duck in Gravy formulas. 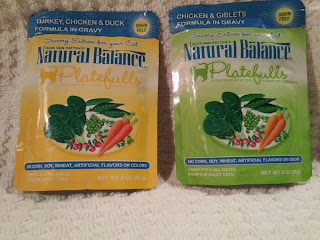 As you can see, Kintaro is a little messy when he eats. He had a little trouble with the food as it was in slices. He cannot seem to be able to eat those slices that adhere from the side and bottom of the plate. Kintaro has a somewhat smooth tongue and prefers pate' or ground food. 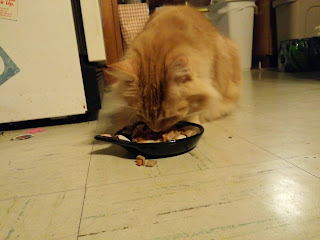 TT, on the other hand, had no problems getting those slices into her tummy. She is notorious for removing food from the bowl to eat it off of the floor. 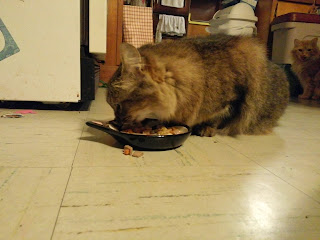 This photo shows the slices in gravy. Lots of morsels and enough gravy to coat them. 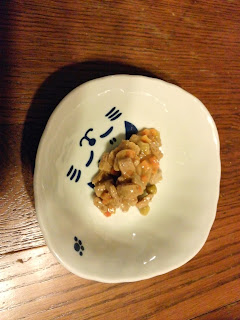 A couple more photos of TT and Kintaro enjoying their samples. 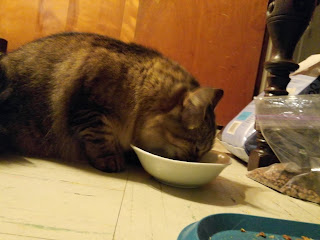 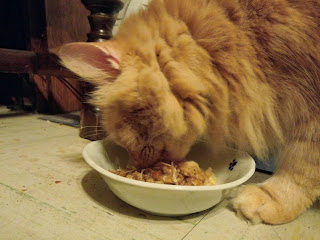 I did have to sprinkle a few fishy flakes on the first bowl I gave to Kintaro. He is somewhat picky and he knew this wasn't his regular canned cat food. Once Kintaro tasted it, he liked it. I did like the handy pouches. No utensils were needed to open and pour into the plates.
mewings by kintaro & tt , and momsbusy at 11/11/2013 12:00:00 AM 11 comments:

We are still here!

We haven't posted in a little while. Things have been busy here but everyone is well. As soon as I get the gazillion photos off of my phone, I will be posting some updated shots of Kintaro & TT. Meanwhile, today is Labor Day. We are trying not to do much labor.
mewings by kintaro & tt , and momsbusy at 9/02/2013 09:56:00 AM 9 comments:

Today we did something different. The good folks over at chewy.com sent us an email asking if we would like to try out some treats. DOG treats! Well, since we do have doggies AND we know some of you other cool cats have doggie friends, we said "Yes!"


Today we are trying some Black Angus Beef Treats. 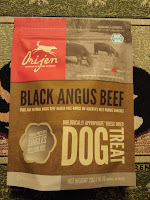 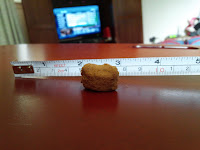 Our expert taste testers are Brownie, Big Boy and Penny. As you can tell, they are drooling as they wait to try out the treats. 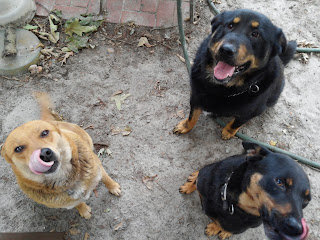 According to the package, the treats are 100% pure beef (single animal source). They have other flavors too. The treats are from canada and are part of champion pet foods. There is a paragraph on the back of the package that states the company is passionate about the authenticity of their foods. They focus on ingredients raised within their own region by people they know and trust. They prepare the origen treats in their own freeze dry kitchens. 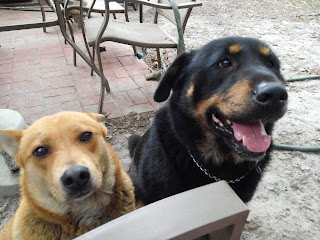 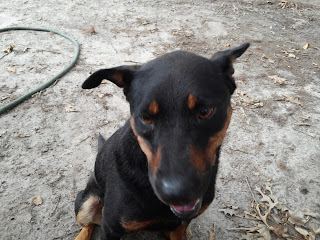 These treats are 100%  YUMMY! as certified by the doggies of kazoku neko.

P.S.  TT could smell that there was something yummy in the bag. So, TT and Kintaro had to try one. So I split one up so they could "see" what the doggies got to eat. They loved it. I do not recommend giving dog treats to cats. However, if my super picky cats liked the treats they must be super delicious.

not good mews but GREAT mews!!!

In our last post we told you about a cat that we found. Pretty little Gracie went HOME! I had posted about finding her in a local lost pet group on facebook. Someone finally recognized her and messaged me. She went home that evening!

To finish off our great mews post, Buddy has been accepted at Rikki's Refuge! This is a super group that helps so many different animals. Now they will be helping Buddy become adoptable! I am so excited. I will be helping in the transport to get him up to the refuge. Please visit their website and support their efforts by sharing and, if you can, donating.

One more thing, please keep all of the people helping with the transports in your prayers. Drivers give up their time and money to help animals in need. It takes a lot of work to put together and arrange a transport. Be a cheerleader for the animals, drivers, fosters, planners and rescues!
mewings by kintaro & tt , and momsbusy at 4/25/2013 10:02:00 PM 6 comments:

We have a problem. If anyone out there in the cat blogosphere can help, it would be greatly appreciated.

As many of you know, I rescued Buddy from a trap that a woman had set in her yard. If I would not have taken him, she was going to "dispose" of him. I just could not let that happen.

I have had Buddy neutered. I also had him tested and he is Fiv+. I know this is not a death sentence. It just means Buddy needs a little extra care. Buddy is a hissy cat. He hisses at us whenever we approach. He never strikes out or bites. Buddy loves being brushed. Buddy really loves to eat. He is now on a diet to lose the pounds that I didn't realize he had put on since his favorite position is the "meatloaf" position. Here he is sitting up in the photo. Can you tell Buddy is a bit round for his height?!?! 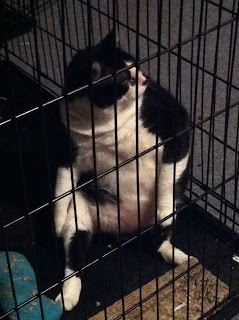 Recently we found a young cat in our yard. She is so friendly. She also happened to be in heat. We brought her in and proceeded to try and find her home. She was way too clean and healthy to be a stray. Our efforts have failed. She is smart as they come. She understands "down" but always seems to jump back up after a few minutes. Typical teenager/cat. LOL We think she is fairly young and this was her first heat cycle. We have also discovered that she can be quite clutzy when she tries to jump up on anything. We joke that she is graceless. So her name is now Gracee. I haven't had a chance to get her tested for all those nasty diseases so I try to keep her separate from Kintaro and TT. Did I mention how she is so persistent that she managed to open her crate twice by herself? We now have a tie on it so she can't escape. She loves her feather toys! She plays with them until they submit to her. 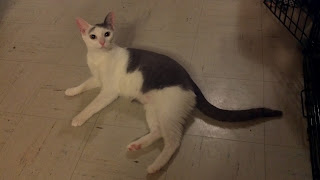 So now I have 2 cats that I am taking care of. Unfortunately, I can no longer care for them. My new business takes up so much of my time. What used to be a 40 hour work week is closer to 50+ hours a week. I am working way too many hours each week to work with Buddy in an effort to help him become more trusting of people. Poor Gracee stays in a crate until I can spend a couple of hours in the kitchen with the doors closed to let her out and play while I do paperwork for my business.

What these two cats need is a home, a real home with people that want, will care for, spend time with them and, most of all, love them. I will do anything I can to help get them to the right home(s). Our local shelter is full (kitten season) and is not a "no kill shelter". Buddy can't go there as he would be deemed "unadoptable". Gracee has a better chance but cute kittens beat out an (almost) adult cat more times than not. Since the shelter is full, I am worried that if I take Gracee that another cat will have "to go" in order to make room for her. I can't stand the thought of that happening.

It breaks my heart to have to let them go to another home. But it is not fair to them to have to live this way. Is there anyone out there that will step up and take a chance on either one of these two? Perhaps, you might know someone that might be interested? Would you please share this story, this plea for help with them?


tt here! mom took a picture of my behind while i was eating. wasn't that rude of her?!?! of course my ploofy tail is beautiful. 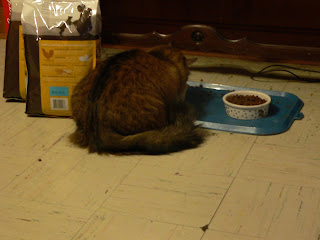 my face is so cute, i am adorable, i have extreme cuteness. 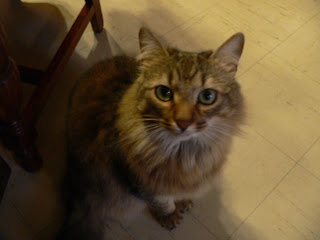 Time has certainly flown by! I can't believe it has been 5 months since we posted last. It has been a busy time for our family. Beside the usual craziness from the holidays, there was a special birthday for our girl (she turned sweet 16), two grand babies turned 4 years old, one daughter turned 30 something, a new grand baby was brought into our family (he was born in september), and the business I have worked at for over 30 years split into two separate businesses (I bought one of the halves).

Enough of the small talk, it is time to see how the kitties are doing! 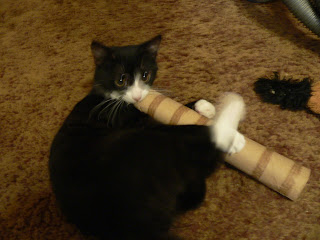 Today's kitty is Speedy. He is the little kitten (just a week old) my mom found and brought home. He was way too young to be out on his own where my mom found him. He is now spoiled rotten. He has serious catitude and rarely stays still long enough for me to get a photo or two that is not blurry. He will be a year old next month (I think).
mewings by kintaro & tt , and momsbusy at 3/20/2013 12:00:00 AM 8 comments: 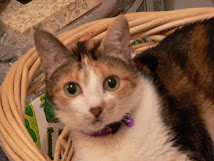 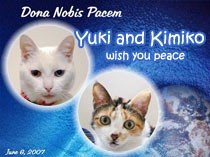